Exhibits tell Amana’s 300 year history with artifacts and answer common questions. How did the Community of True Inspiration start? Why did the group emigrate to America? How did someone become a member? How did food and housing work? Why did the community give up communal living?

The Amana Meteorite of 1875 – permanent exhibit

During the night of February 12, 1875 the Amana Meteorite or “Detonating Meteorite” lit up the night sky as far away as Chicago and St. Louis. Pieces of the meteorite are in museums around the world, including London and Paris. Our exhibit features an actual piece of the meteorite as well as maps, charts and contemporary documentation.

1918: Pacifistic Patriots of the Amana Society During WWI – temporary exhibit

We created a special exhibit to commemorate the centennial of the end of WWI. We wanted to honor the over 50 Amana Boys who served during WWI by having local artists paint portraits of them. The exhibit will be up through December 31, 2019. 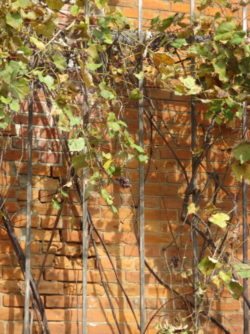 A Creepy Tour of Historic Amana